Once upon a time there was an unicorn and that unicorn has pooped and the shit started to identify as an ice cream.

The scientists came and after laboratory tests they concluded it is just a shit but the shit felt offended cause it still believed it is an ice cream and the trojan horse, oh sorry, unicorn has closed their mouth with the political correctness and then he, she or what ever it wanted to be has said:

The antichrist from Russia

The antichrist from Russia, drawing

I guess you all know this evil man. He now makes war, after hitting his own people with antidemocratic laws. The world war 3 may start from his aggressive politics. He was bad since he was a child who was beating other kids and that’s why he prefers martial arts. He has the power and now he is using it against the world. I’m glad I am not living in Russia cause if I was there he would put me in prison not only for this post. He and his governmental system would put me in prison for breaking the gay propaganda law and blasphemy law with my drawings and my blog posts

How democratic is Romania? Artists in Romania can put their art on display only with governamental authorization

The Romanian Artists Association has lost it’s gallery in the Herastrau Park in february this year, after the political changes that took place last year when the government changed and the anti european and pseudo liberal (He is pretending to be a liberal but he acts opposite to liberalism. He protected far right extremists like Gigi Becali and his true political views are not far from Hitler’s views) Crin Antonescu and Victor Ponta who is not far from Stalin as political views got the power. They changed all the people who worked in the state’s structures, from the ministries to the last guardian in the park and they made Bogdan Peter Tanase(a part of the mafia who had illegal buisiness with graves when he was leading the cimitires’ administration in Bucharest) the leader of Bucharest’s parks’ administration. The gallery was closed abusively by the Bucharest Park’s Administration under the pretext of a rehabilitation of the building that never happened. The videos below show the art galleries in Herastrau before and after their abusive closure

Now the gallery is still closed and they told us that we need governmental authorisation to put our art in display, so now in Romania art is censored. Televisions are censored and politically controlled too, the right of free expression being just empty forgotten words that still remained in a constitution that is not respected. Here in Romania the artists have no right of free expression through their art and no place to display it, not even on the street be cause they need authorizations over authorisations for an exhibition. An artist who put his art on display with no no authorization will get arrested by the police and fined. Do you thing this is democratic? I don’t know about other countries  and I am waiting for your comments. The only thing I know is that Russia, Ukraine and other countries in the eastern Europe do the same. Is democracy dieing in the Eastern Europe? 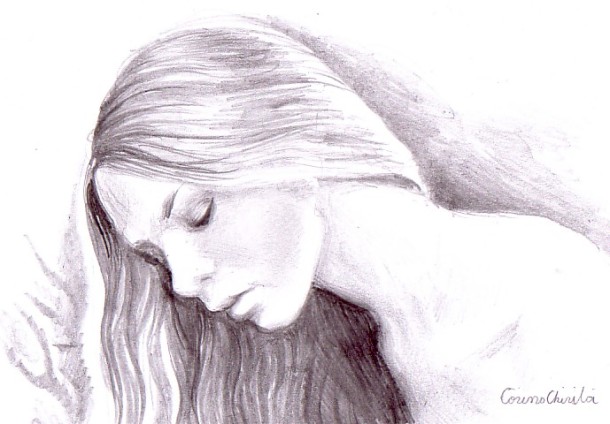 This is my newest pencil portrait drawing of a beautiful woman

The dictators, Stalin and Hitler from Romania

Hitler and Stalin were the most terrible dictators in the las t century. The world would have been a better place without them. This is my pencil drawing of a Hitler who is protecting Gigi Becali and other far right extremists who pretend to be liberal (this happens only in Romnia) and a Stalin who copied at the Phd and is the enemy of culture and art. Be cause of this Stalin who is our prime minister TVR Cultural was closed ant the association of the visual artists in Bucharest is loosing the art galleries where art could be displayed. Since this Stalin and this Hitler are ruling the country there is no place for art and many other activities here in Romania  and there are no jobs. They are are the enemies of art, agriculture and private initiative. They’ve put taxes even on the animals people at countryside have.